How was the passage?

So I thought that i will write a little everyday on the passage between Tenerife and Cabo Verde!

Kai and I went to the marina office to pay the last fees and then we where of after talking to family and friends telling them than we where going to be out at sea for some days!

We left at around 9.00 in the morning and everyone was super excited!

It looked like we where going to have great winds and a fast passage. 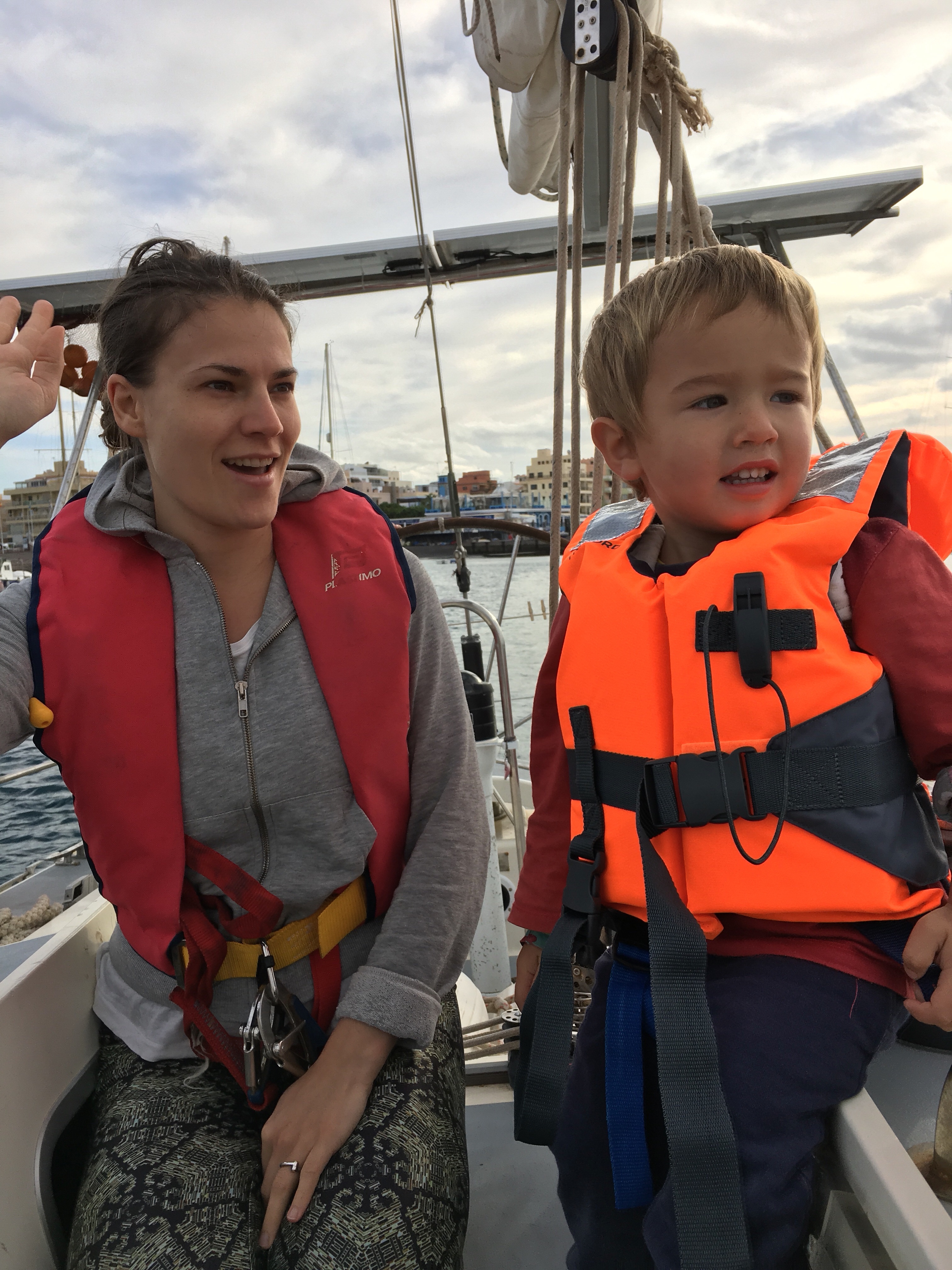 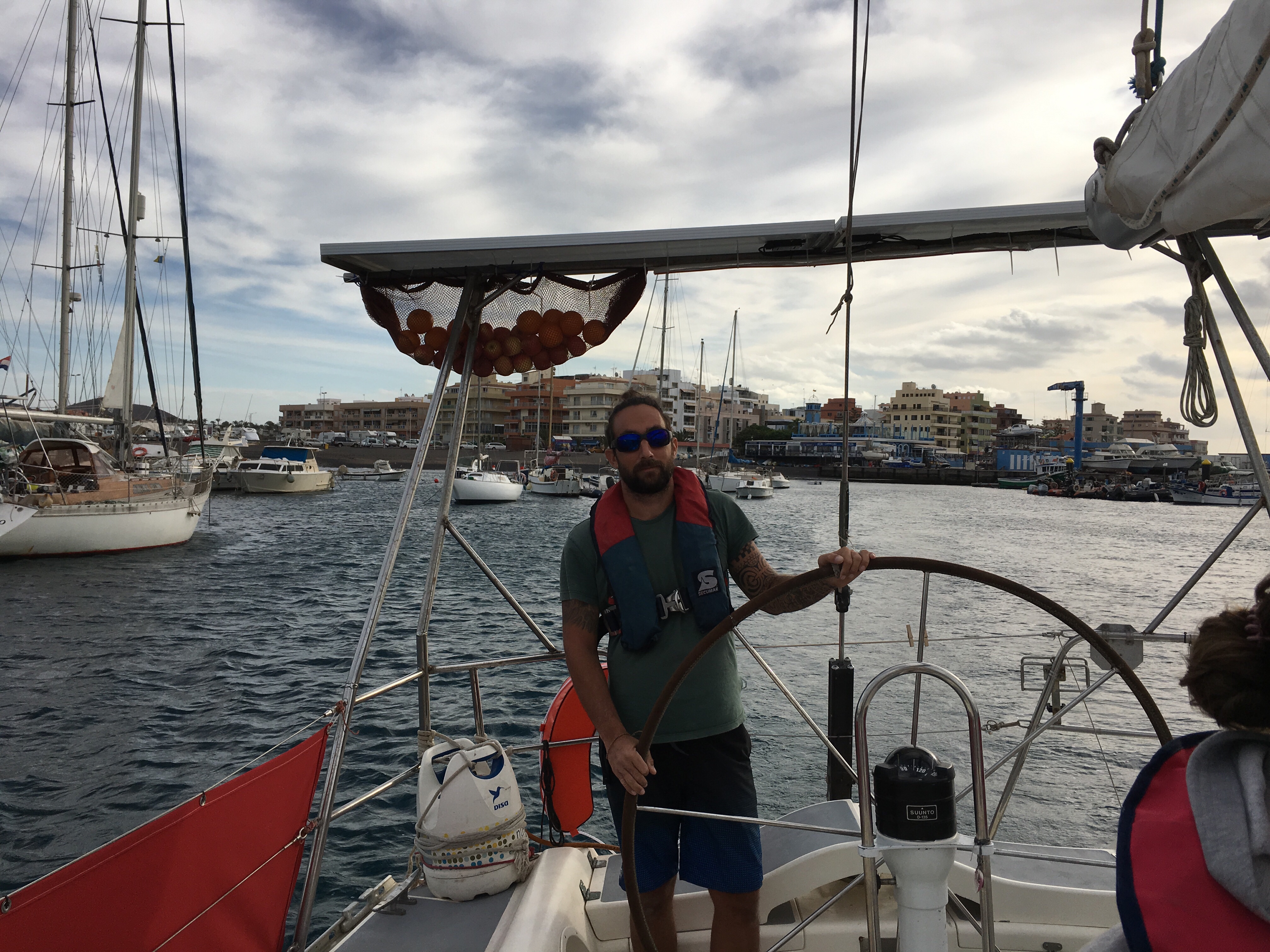 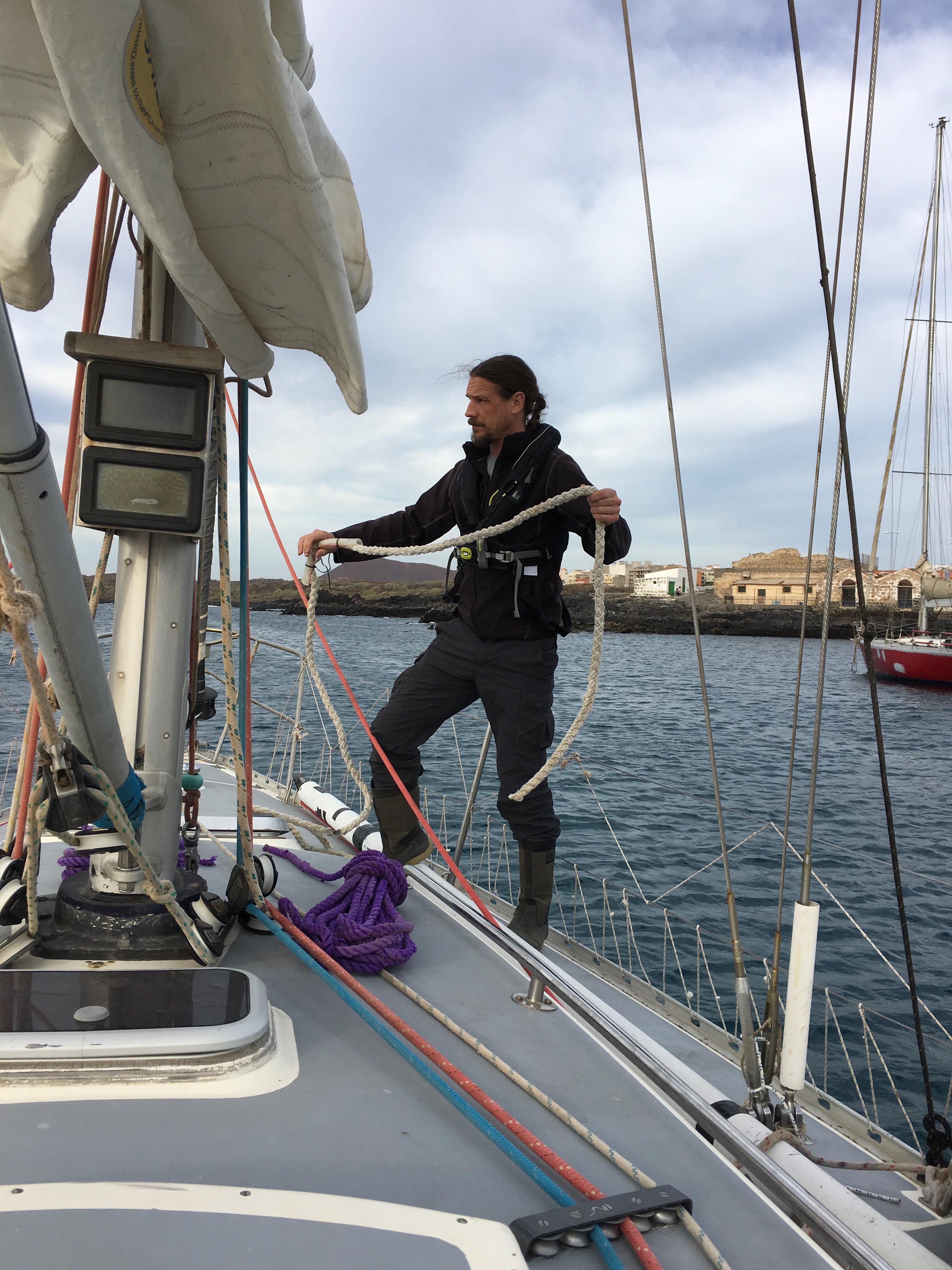 Everything started great.. I was looking after the kids while Markus was taking up the sails and showing everyone what to do and explaining the boat. It was quite a big sea and after a little while Kai started feeling a little bad.

Sara was also not feeling good, and I was having a hard time taking care of both kids. Little Alizé was falling around as the boat was moving in a funny way.

Then after some hours out, the steering stoped working!!! Something had snapped! Markus was fast outside and I called Ben to go out to help! Find the emergency tiller to steer and try to figure out what went wrong.

At this point the boat was moving a lot with the waves and suddenly Kai complained that his stomach was hurting and buuuaaahhh vomit! This was not a good start! I was so nervous at this point, but trying to play cool so Daniel and Sara would not worry. 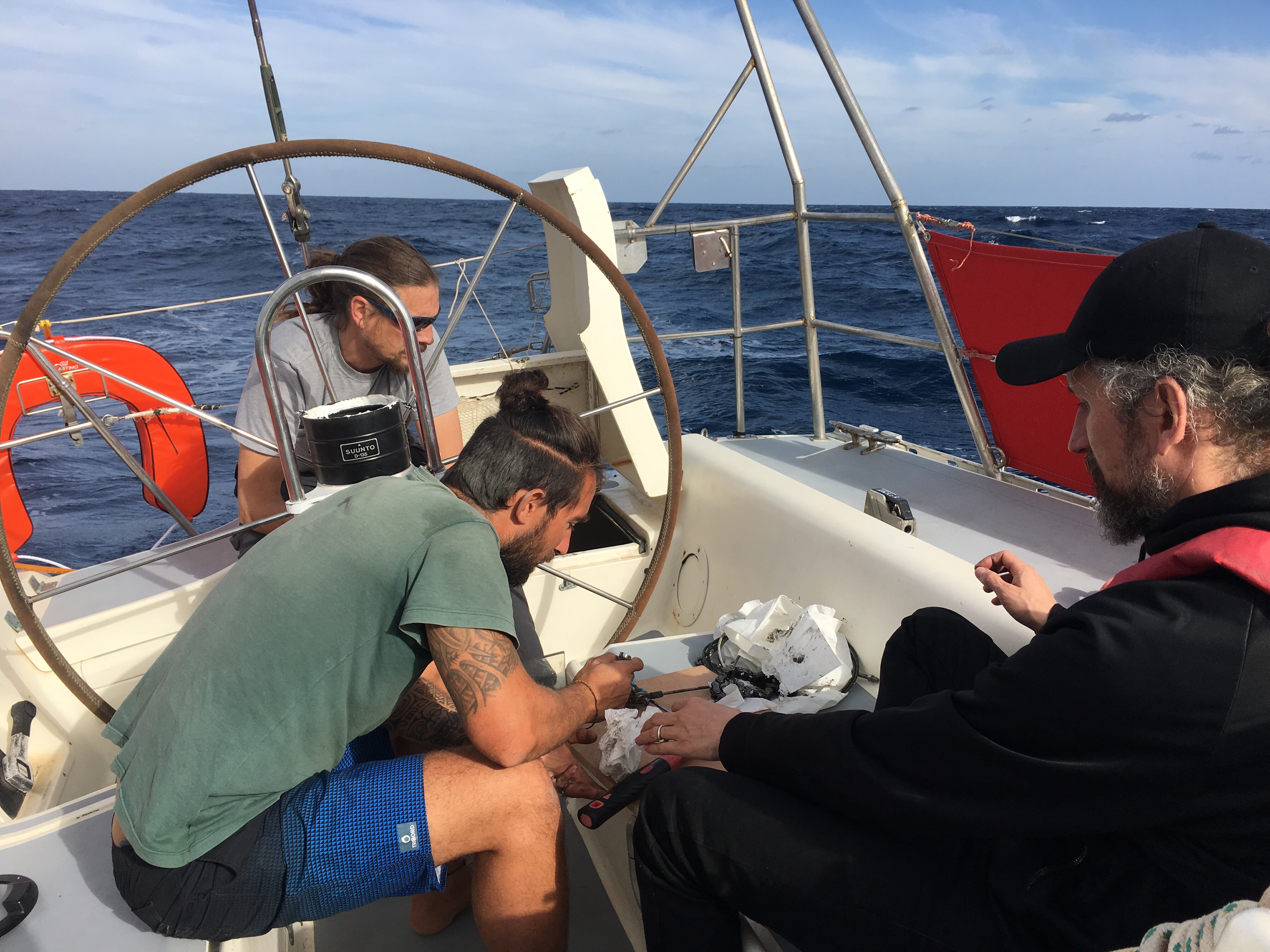 It was the chain that had snapped and broke!

Markus was on it straight away and it took around 4 hours before it was all fixed, but not with out leaving a big mess on the boat! Oil and grease all over the cockpit and our bed in the af- cabin! 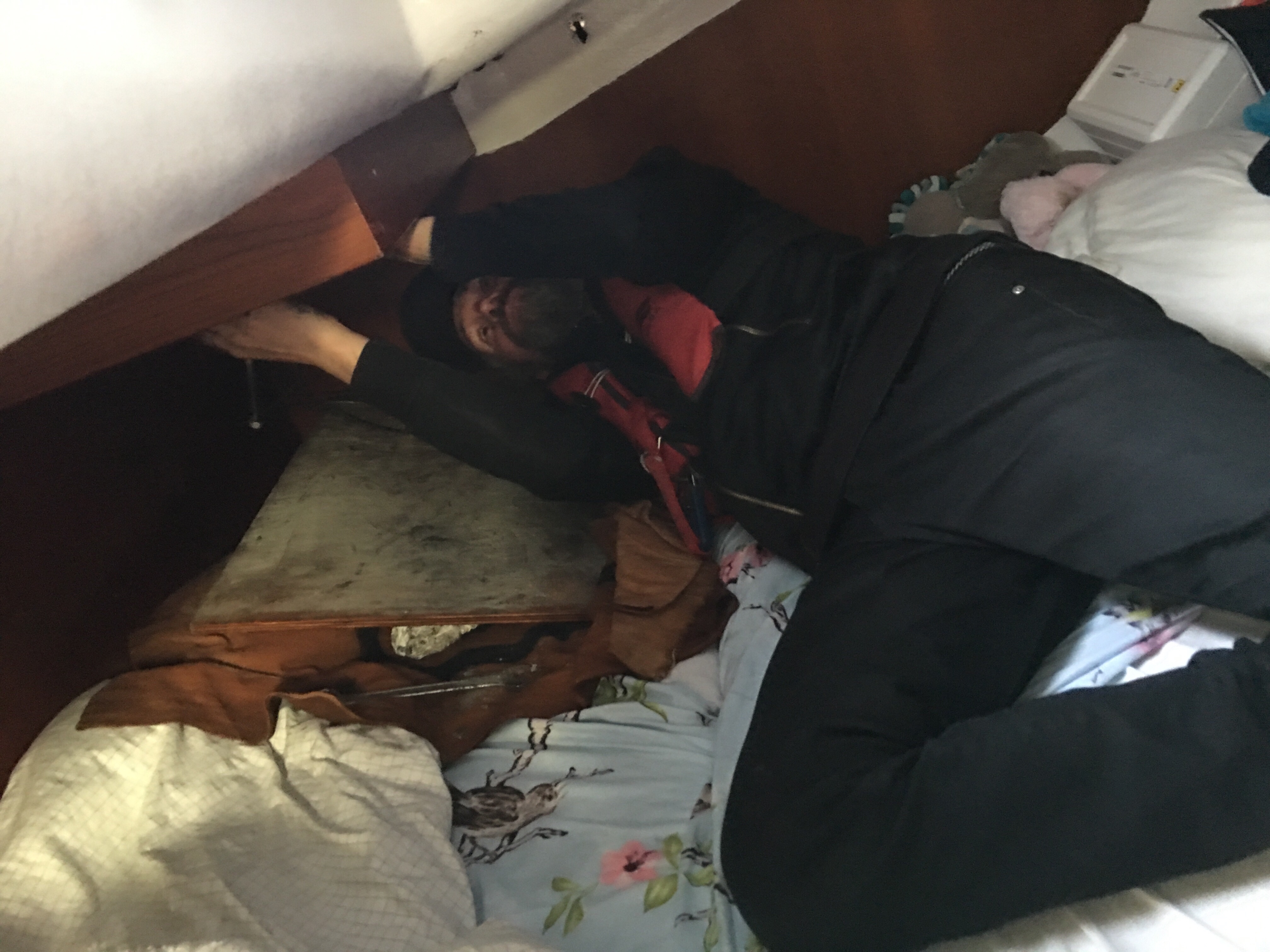 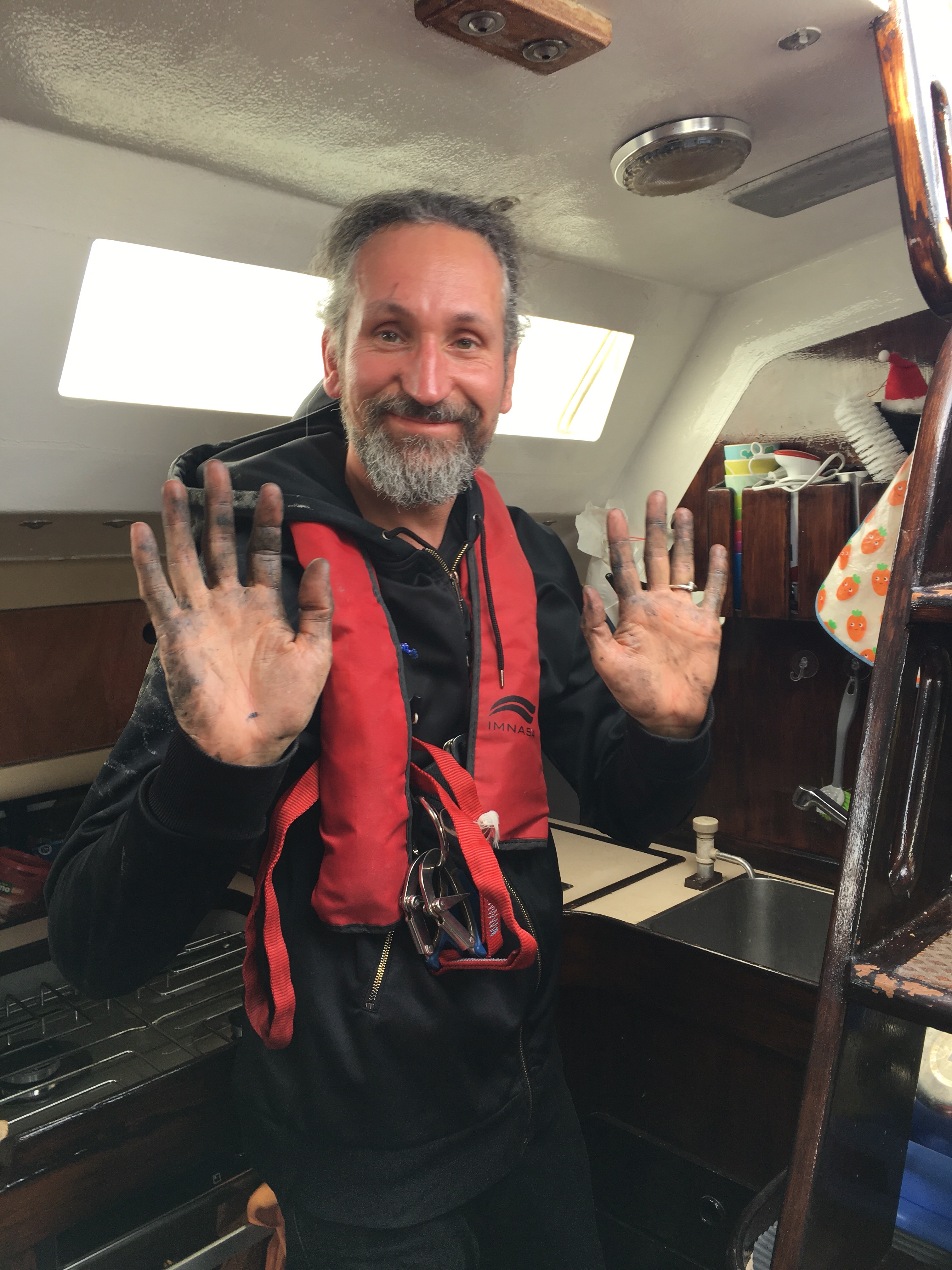 O well, the first day was hard! A lot of wind that made it a challenge to steer, Sara trying to be super strong even doh seasick and I having a hard time with both kids and having tooth pain and taking antibiotics. Kai feeling bad and puking ones in a while, but nothing that a chocolate sandwich couldn’t fix!

At one point doh I got overwhelmed with my feelings and said “this is not going to work!, we won’t be able to keep sailing! I’m not enjoying this at all!!!! ”

I can tell you this, first day.. one of the craziest roller coasters I ever been on!

Getting better, but still hard!

3 to 6 day: I’m not having time to write so now everything is getting together..

Sara is feeling much better! Not seasick anymore! Kai as well! Alizé is having the time of her life not really getting that she is sailing an everything is like normal.

We had some dolphins come and visit in the night and with the bioluminescence it’s so freaking magical!!! It’s so hard to explain to a person that never seen this before, and the only closest way is if they have seen the movie “life of pi” when the big whale comes and jumps when he is floating in the water in the night.. glowing.. it’s something like this…

I also know that there is a YouTube video with it.. going to find it and share it! But the thing is “It’s GLOWING DOLPHINS”!!! We woke Daniel and Sara up to see it, and they where amazed! Couldn’t believe what they where seeing! Cheering like little kids when they saw the dolphins in the bow (front of the boat). It was wonderful! 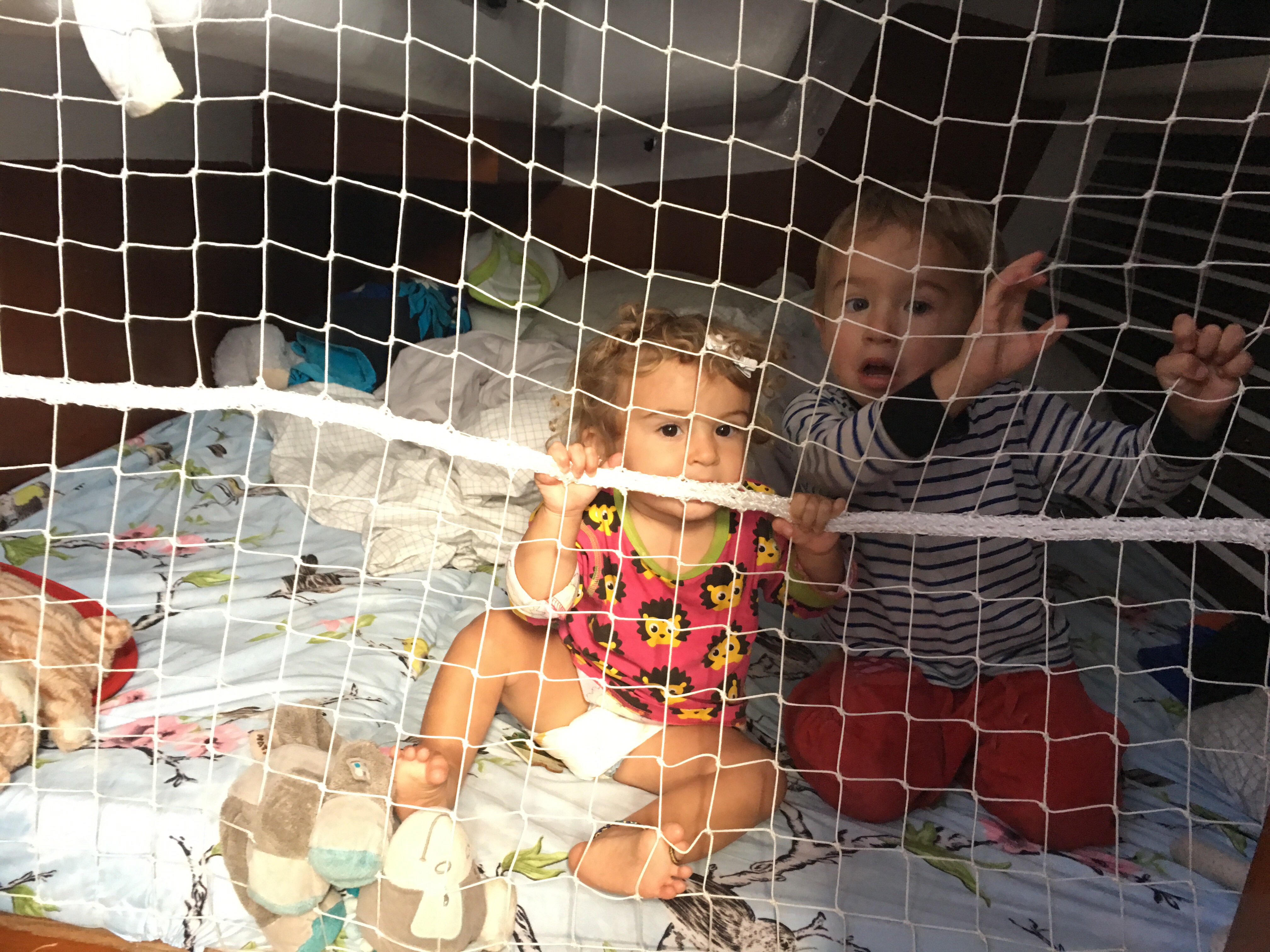 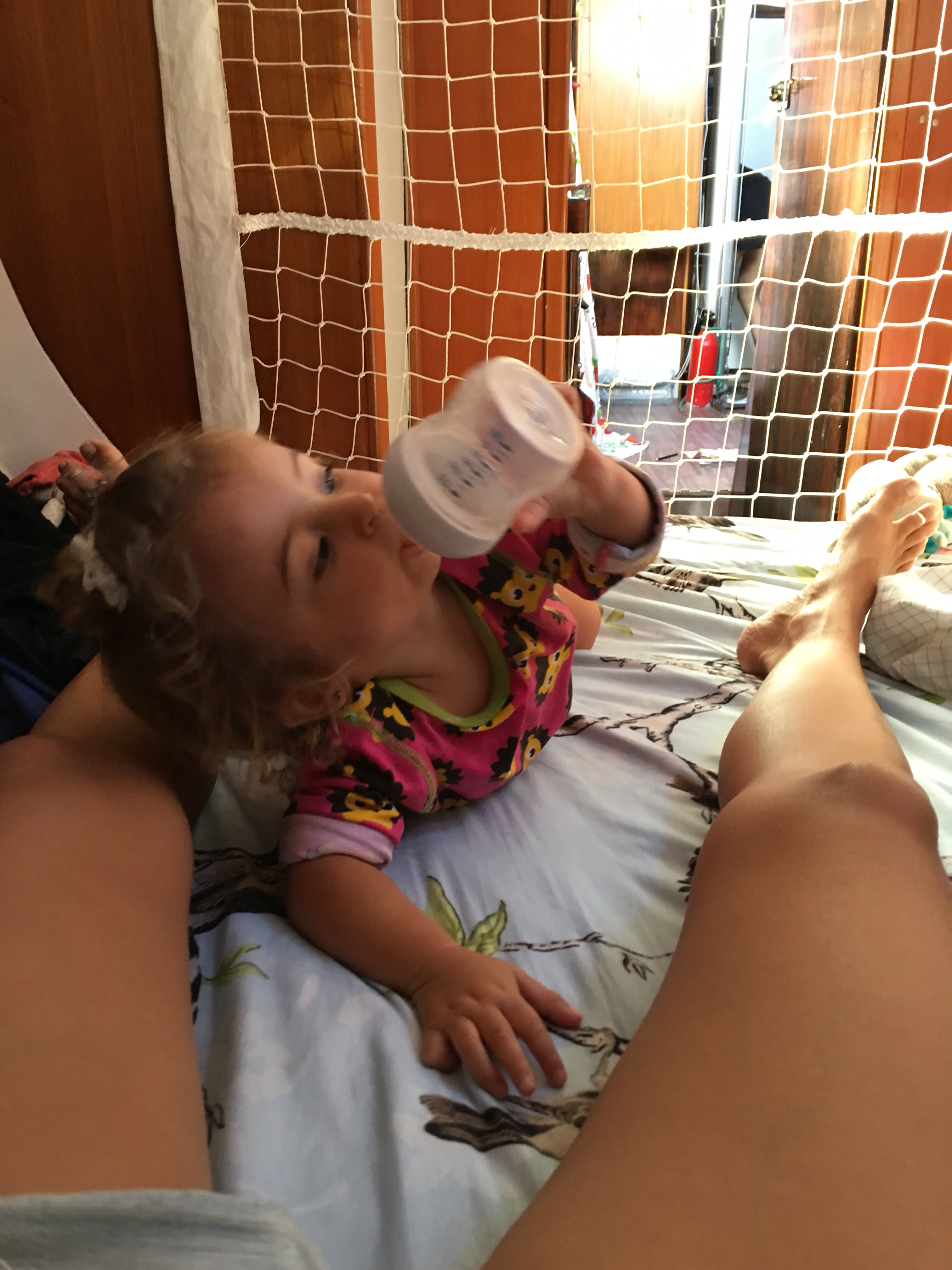 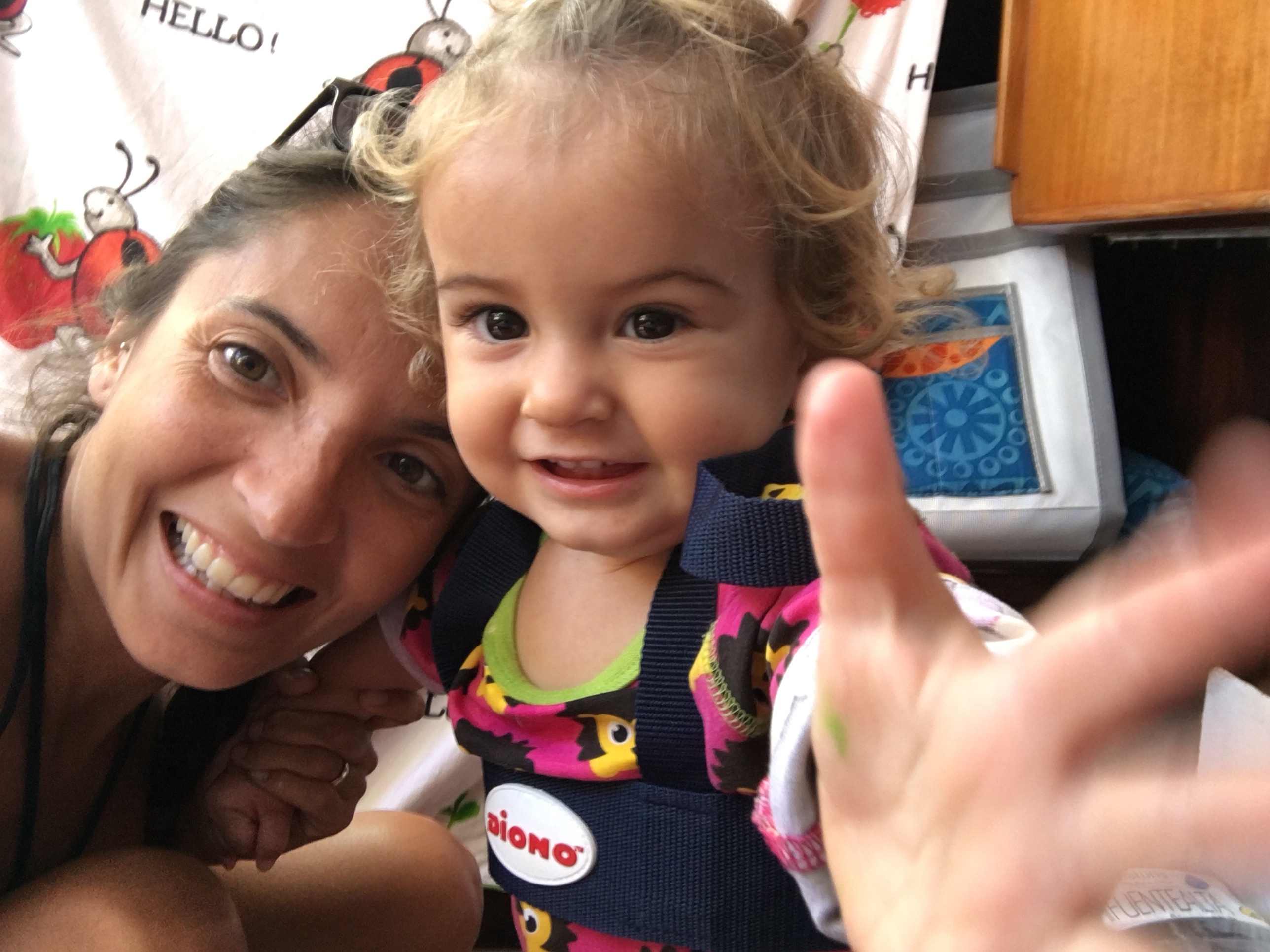 The nights where great an the Milky Way beautiful as always when there is no light from a city disturbing.

My roller coaster kept going till the end! Some days where better then others but I won’t lie people, it was hard!!! The kids where great but it was hard. The last days before arriving was just like.. I want to get there NOW! Sometimes I felt like a screaming crazy monkey mom! But it had great moments as well. One day Kai needed to get some energy out and stated to dance like crazy! He had some moves this little sea monkey! And he got so sweaty but having so much fun! 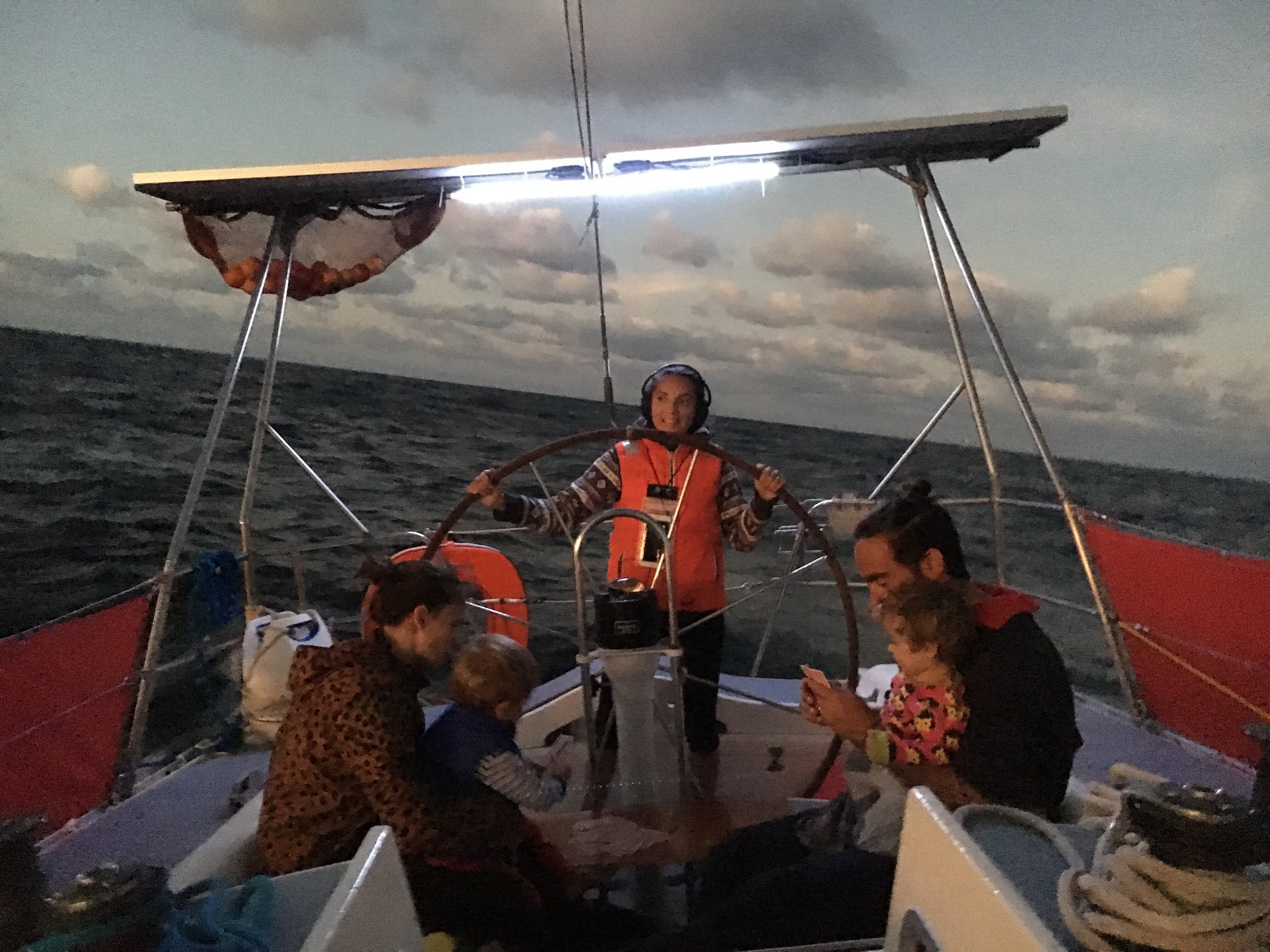 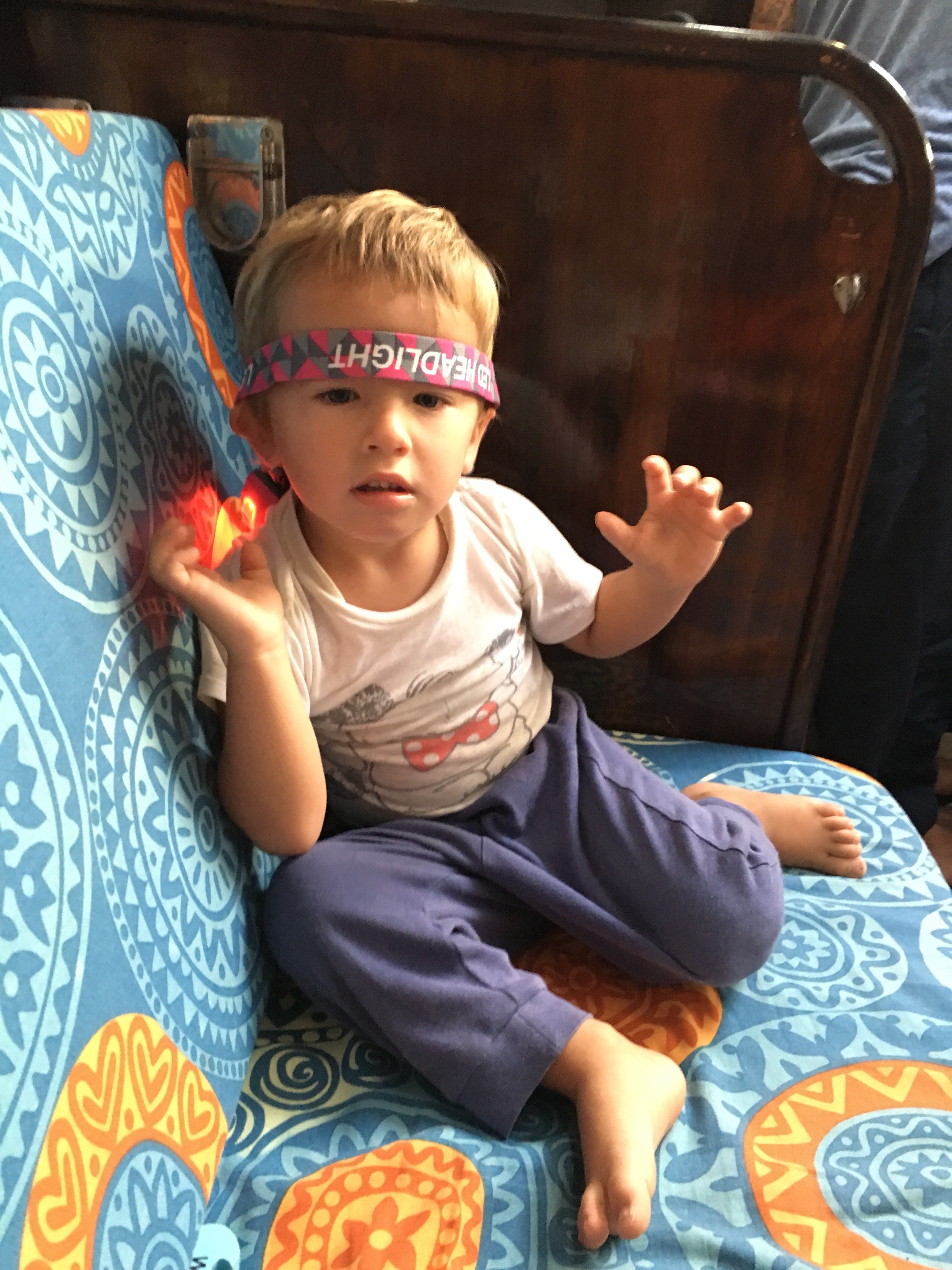 We arrived on the 6 day in the morning and when we all saw land we all got excited! We made it! Sara and Ben made a little song and where singing till we got there! We got to the anchorage and got to try our new anchor and it’s a good feeling to not go in to a marina! We where also super happy to see our friends from the boat “Damien” that has a little girl Lullic that we meet in El Hierro. Kai was so happy and wanted to go over and play with his friend straight away!

Now we need to do all the paperwork to get in to the country, clean up the boat and see what the town of mindelo has to offer.

Our new crew will also arrive and sadly we have to say goodbye to our new friends.

But that was the passage!

Woho! We made it! First big step to see if this life is for us or not! One day it was one day not.. what will it be… hahaha