The last pasted weeks has just gone by so fast.. We been doing a lot of things, we went surfing at a place called  Tongo here in San Cristobal last week and it was fun!!!! I was a bit scared and nervous when we called the water taxi on the VHF to come and pick us up from the boat to take us to the wave that’s like 15 minuets away by boat.

But now we where on our way and i jumped in the water and started paddling to the wave. Markus was so happy, and he tried to catch waves straight away. While  I sat there for 1 hour just looking at Markus and the 3 or 5 other people taking waves. IT TOOK ME 1 hour to start trying to take waves! just looking at the wave trying to figure out where to be when the wave comes so I can catch it and when i got enough courage I went! And it went good! I started to have fun, i took one wave after the other, and in total i took like 10 waves…! I was so happy, happy that i was happy and having fun! and not hitting my self and getting tumbled to bad. I felt that “I can do this, maybe there is a chance that i can learn surfing after all” The feeling when you catch a wave is pure happiness and adrenalin at ones, and when you take a bigger wave or a more powerful one and you manage to ride it you scream out a little “WOOHOOO”.

I understand why it’s so addictive and you want to do it over and over again.

After coming back to the boat it was time to say “Goodbye” to Gayathri that was leaving us, and joining “North Star”. They where sailing to Floreana and Isabela island before heeding to The Marquiese.

Im so happy for Gayathri, that she is going on here own adventure. It’s a experience that she will remember for ever! It feels like yesterday when i was in the same shoos as her. When I joined “Marionette” (Markus, my husbands boat)  5 years ago. The feeling of nervousness, happiness, excitement and fear all in one, but you know that it’s totally worth it! Because is something that it’s going to stay with you for the rest of your life and change you for the better! Gaya, this is you’r adventure of a life time. I love you ❤

The “Goodbye” was quick and we didn’t do a big deal of it, we know each other for more then 10 years, and we know that we always with each other even if we not in the same place in the world we are true soul sisters.

The next couple of days we been working on the boat, getting little things fixed and cleaning. But at the same time enjoying our selfs. We went diving in “Leon Dormido” or Kicker Rock as they say in English. This place is so AMAZING! The hole Rock is compressed volcanic ashes, so it’s very fragile. You can’t go diving here when it’s raining for example because the rain can cause slides. 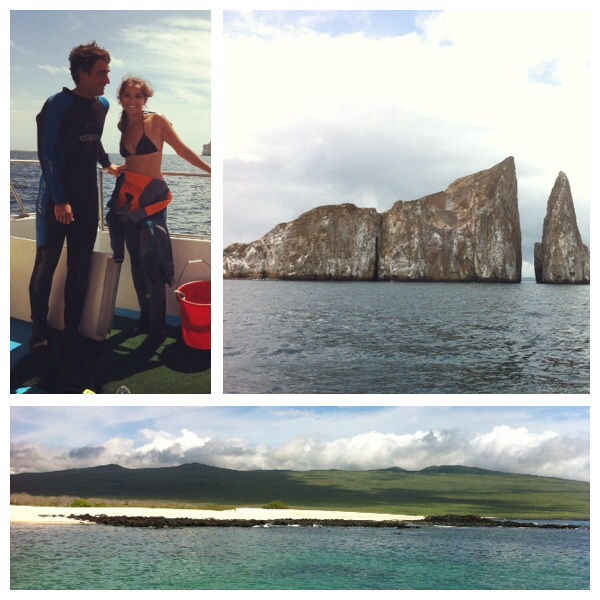 We left in the morning and did two dives. At the first dive we jumped in the water and 3 minutes in to the dive we looked out throug the big blue and saw maybe 20-30 sharks in a scull. WOW! the bigger sharks where Galapagos sharks and the little “smaller” where black tip sharks. The visibility was around 10-15 meters, witch is good for this place, we saw a lot of fish and turtles. 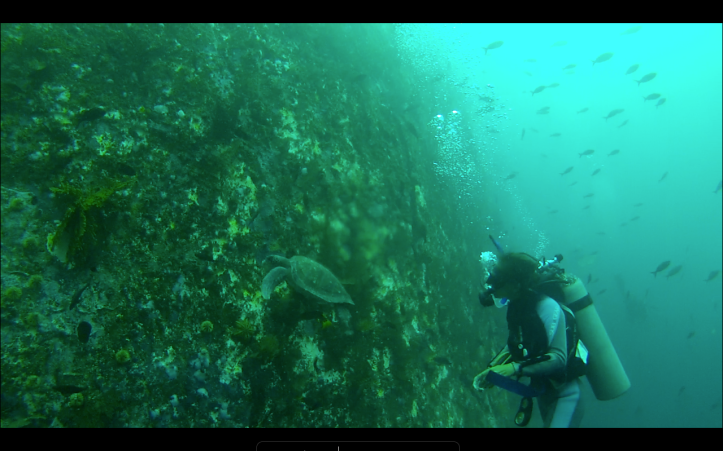 The second dive we jump in and see this HUGE wall of black stripes Salemas. It was just AMAZING AGINE! Never seen anything like this, we dived in to the wall and the only thing you could see was fish, fish, fish. YOU felt like one of them, hahaha…. just amazing. On this dive we got to see a lot of green turtles and get really close to them to, as well as some sealions. Galapagos is really one special magical place. there is no other way of describing it. 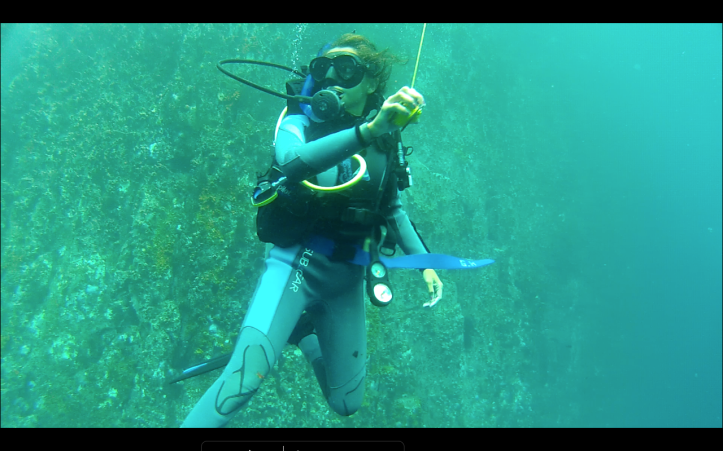 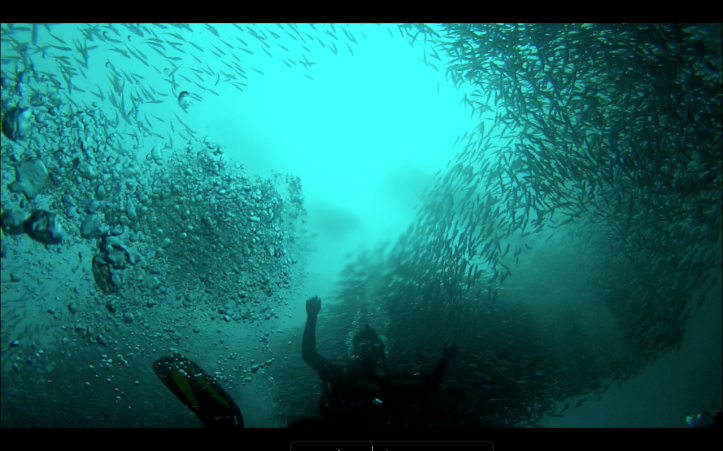 After the dive we got to relax at a really  nice beach for 1 hour, just a perfect day.

We been enjoying diving so much, that we are thinking of taking our PADI- advance course, that’s exciting! You get to go NIGHT DIVING, woohoooo spooky…:D 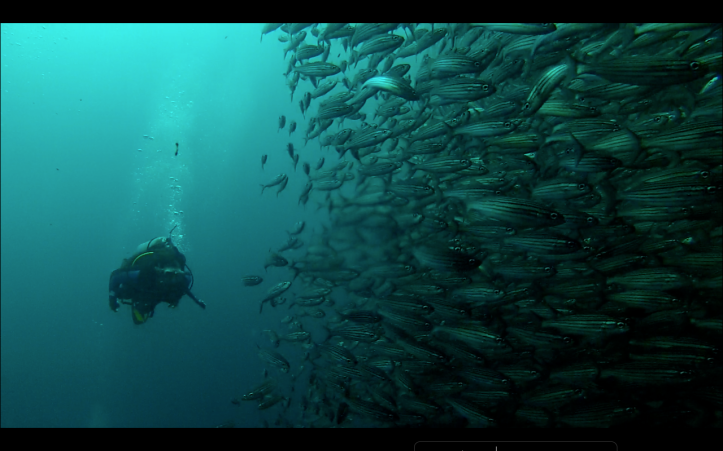 Yesterday and today has been cleaning days, as well as SURFING days. Yesterday at “la loberia” we got up at 5 in the morning to go there!!!! Talk about addiction right?!? We meet up with a friend that wanted to join us and we left hopping for some small waves. Loberia is “famous” for it’s biggest waves in Galapagos. but we had talked with some people and they had said that it was smaller at the moment. But when we arrived it was MASIVE! at least in my eyes.. 😉 And there was no way I was going out to that powerful wave. So me and Laeticia sat on the beach that we shared with some sea lions and thousand of sand-flies. It still was a nice morning, but getting up that early changed my routine. So when we came back I fell asleep straight away and i sleep for like 4 hours! then i woke up and wanted chocolate, so I made a chocolate cookie. Markus how did go out to try to catch some waves in loberia and didn’t catch any had left with the water taxi to Tongo to try his luck there. When he came back he had a big smile on his face and said that he had caught a lot of waves! HE WAS SO HAPPY. 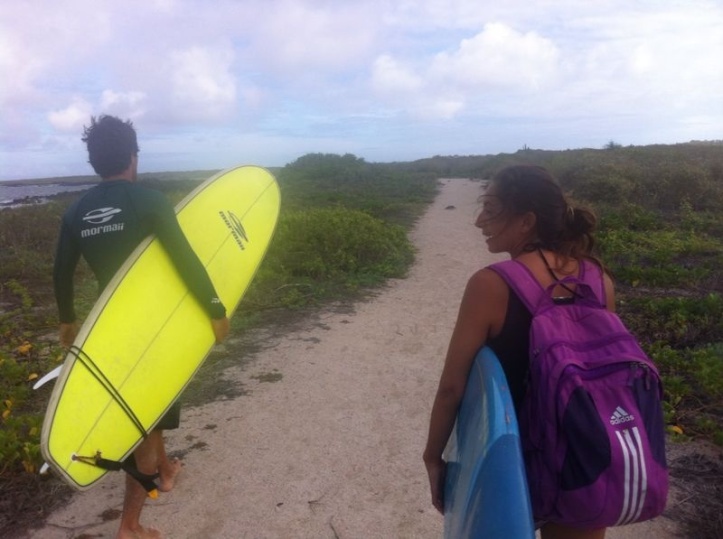 Today we got up early to go to Tongo, Markus wanted to go back as he had had so much fun yesterday. I was feeling SUPER NERVOUS! I knew that it was going to be bigger then i was used to and that scared me. I was running to toilet every 5 min before the water taxi came and telling Markus that I didn’t know if I wanted to go today. BUT I DIDN’T HAVE ANY EXCUES NOT TO GO! Just plain FEAR.

It’s crazy what that dose to you, i even had shaking hands, and a big ball of nervousness in my stomach.

The taxi was here and we went, jumped in the water and it was HUGE! This didn’t feel good or right. Markus paddled out to the break straight away and i staid far away, floating around in the water. There was maybe six other people out in the water and more where coming.

The only thing that was going trough my head was, “Im going to be here for 3 hours, just flouting around in the water. I want to go to the beach, but how?”  The waves where breaking down, Markus was far away, I was scared.

It’s crazy how your mind works, I had pictured the big waves before even seeing them, and was already freaked out before jumping in the water, and now i had like this big block inside me, that i knew that if i took a wave i was going to hurt myself again. I was hateing it! After like one hour Markus came closer and asked WHY i was so far out… “GAAAAAA IM SCARED! I WANT YOU TO HELP ME GO TO THE  BEACH!” Markus tried to calm me down and started to tell me that it was not that much bigger then the last time we where here together. But the block was to strong. He said that he wold stay with me a little and be by my side on the smaller wave. There where other “beginners” there and they also tried to give me courage.

And a wave came, and i paddled and off i went, down the wave, going on the side and riding it, It was great! But….the fear was still there and that was the only wave i took. I didn’t dear to take another one. And when i saw the water-taxi coming to drop of some other people, I paddled out to him and asked him to take me back to the boat. Markus stayed  and took a lot of waves, and  came back with the other surfers later.

I came back, tiered, angry and disapointed with myself. It had gone so good the other week, how could the fear be so big? I don’t know, the only thing i know is that there is nothing else to do then go back tomorrow and overcome.