The last week in Galapagos!

So what have we been up to?

Well let me see, we started our PADI- advance course, and we got to do some more dives in Leon Dormido, which was really nice, we did the navigation under water, got to do a wreak dive to an over a 100-year old ship that is in bits and pieces really close to the harbour. And well the most exciting thing was the night dive! I was really nervous about the night dive. How dark is it going to be? What if I lose Markus under water!?! iiii… it was a really exciting feeling when they came and picked us up and putting on the equipment, talking and planing the dive in the dark. We were six divers and we started to jump in the water one after the other. There we were floating on the surface with this tingling feeling in our stomachs when the instructor told us to start going down. AND WOW! It was just so cool!! The flash lights were really strong and you could see the bottom, the visibility was really good too! We saw a lobster walking around and we saw a lot of sealions hunting for fish. They really liked that we shined on the fish so they could just catch them, it was really cool! We also saw two big seaturtles and one of them was sleeping. 🙂 We also saw an octopus. Another really cool thing was that at one point we turned all of the lights off and we started to move our hands and bodies and we could see all this little particles shining up! Flosforesens! Really nice! It was just one more AMAZING/ MAGICAL thing to put on the Galapagos list. 🙂 And the exciting thing, we passed our ADVANCE course! Wiihii… so we are advance divers now! YES!

We’ve been surfing as well during the week, Markus is doing really good and he is taking a lot of waves and he is improving a lot! Riding the waves getting more and more control of his movements while riding. Me, well I’m doing okey. 🙂 still freak out a little bit and little too chicken, and some days are better then others. But I’m happy at least I took 3 waves on a bad day! And the other day I took one of my biggest and funniest waves so far! It was over head for me and down I went and rode the wave! WOHOOOO… so nice! But I can’t say that I’m addicted to it like Markus. He still has to convince me to go with him….

We have also been sightseeing a little bit more, thanks to “Sunrice” a lovely family from the USA that we actually met in Panama. They wanted to go see a beach that is called “Puerto Chino” and we got together in the morning and we stayed the whole day there. It was really nice to hang out and spend the day on the beach.. We saw a scoole of spotted eagle ray’s surfing the waves. Markus got to surf a little bit on a beach break. And one of the things that i found really cool was that when it was low tide, there was a part of the beach that had green sand! A green beach! 😀 But it was raining and cloudy the whole day, and the beach was not THAT impressive as I imagined it.

One beach that I did love was the “playa de serro brujo” the “wizard beach” translated to english. IT WAS JUST SO BEAUTIFUL! WOW WOW WOW! white sand, nobody there except us the water was this beautiful turqoise color, just beautiful!
Part of the fun has been getting the boat nice and clean as well as the boss and his family was coming to visit us. But just yesterday we found out that unfortunetly they are not coming . We really like our boss and his family, so we were sad that we’re not going to see them just yet. 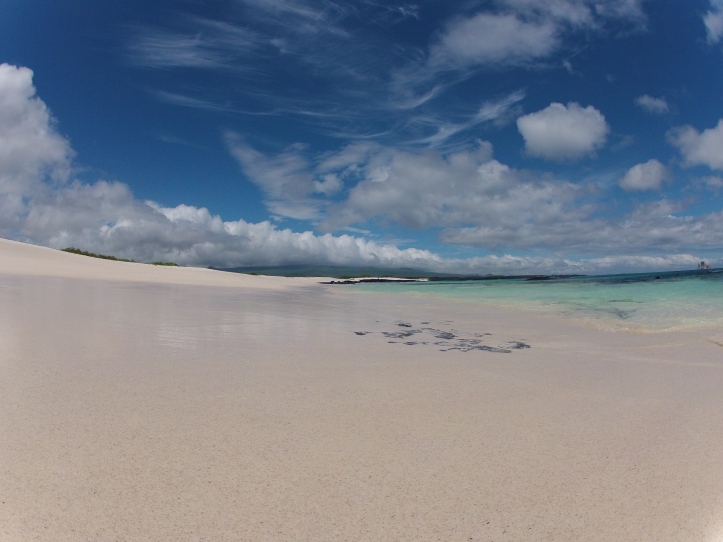 But now is the time to get ready for the big crossing to French Polynesia. We only have one more week left in the Galapagos, then we have to leave this MAGICAL place, 3 months pass so fast! I could stay here 3 more months! I don’t want to leave. But at the same time Im really excited to go sailing and new adventures!
To think about the passage my mind goes to Gayathri, and I wonder how she is doing! They are probably really close to land! I hope I get to talk to her before we leave, so I can hear about her amazing adventure!
Enjoy life people, we only live ones!
Love
Cathy 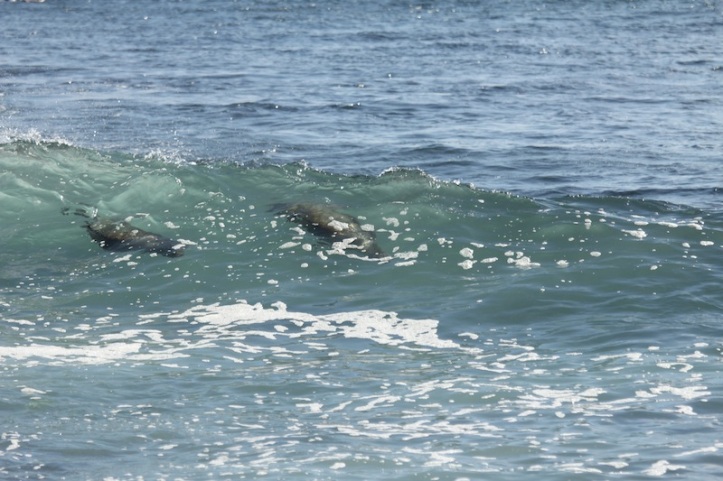